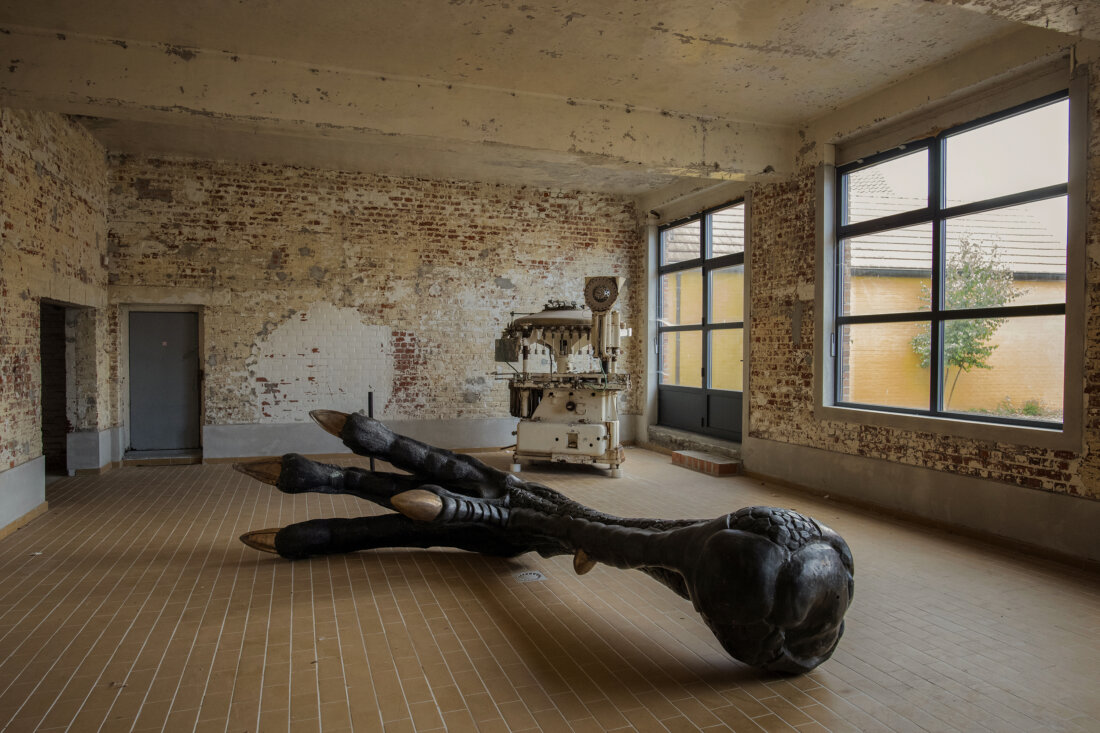 b. 1965, Sint-Truiden, Belgium
lives and works in Genk, Belgium

Vanmechelen is a multi-disciplinary conceptual artist using painting, sculpture, and video. His practice is situated at the confluence of art, science, philosophy, and community. Central to his work is the concept of biocultural diversity. He investigates this through the domestic chicken and its ancestral species, the red jungle fowl. In addition, his practice addresses the fundamental issues of identity, diversity, globalization, and human rights. 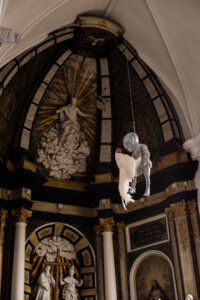 The Narrative’ sculpture relates to Koen Vanmechelen’s iconic ‘Cosmopolitan Chicken Project.’ It shows a jester in dialogue with a chicken. The chicken serves as a metaphor for the human being, a species breaking through boundaries and betting on diversity. Meanwhile, the dwarf, through his diversity, is gladly accepted by all the great institutions of the world. A jester who entertains kings and queens at court and is welcomed in God’s house. Looking each other in the eye, the dwarf and the chicken embrace and acknowledge each other’s diversity. In the church, Vanmechelen creates a tableau vivant, a dialogue with the existing sculpture of a suffering Jesus. The rooster at Jesus’ feet represents the denial of the God-Christ. It clarifies
humanity’s essence, its capabilities and its failures, otherwise known as ‘the human condition’.
It also stands in conjunction with the scene on the other side: Ilke Cop’s painting depicting women who play an essential role in Watou and introduces them to the spiritual realm. It is an invitation and what is suggested is not so much the submissive interaction of Man, listening to the divine rather an invitation to help determine and actively participate in the act of inspiration.
Vanmechelen thus presents a new narrative of what it means to be human.

The chicken died a natural death.

T-Rex is a chicken claw sculpture so titled because chickens are descended from a group of dinosaurs that include the majestic Tyrannosaurus Rex. It is installed in the presence of Nicol Visioli’s enigmatic film featuring a turkey that seems disorientated in the desolate Icelandic landscape. Presented in this context the chicken claw resembles an archaeological find evoking a primordial past while the DNA of the extinct T-Rex has evolved into the chicken.