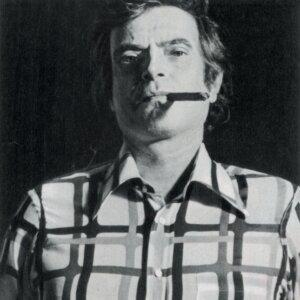 Broodthaers was a poet and interdisciplinary conceptual artist who used language, objects, photography and film. His work examines the conventions of art objects and the context in which they are shown. Using a variety of witty visual puns, he called into question the authority of institutions like museums and galleries. He was particularly inspired by René Magritte’s works that introduced written words to contradict a visual image thereby questioning the relationship between art and the reality it depicts.

‘Les Animaux de la ferme’ (Farm animals) shows the arbitrary and convention-based relationship between words and objects. The work, which takes the form of a classification diagram, makes a parallel between different breeds of cattle and car brands. It is an ode to farm life, but at the same time questions the domestication process. It shows the beauty of life, but also asks how far we can go in commercializing life. As a poet and an artist, Marcel Broodthaers is a particularly relevant addition for a festival that embraces both genres. Broodthaers’ work hangs near the homage to Bernard Dewulf. Watou 2022 pays tribute to the legacy of both.