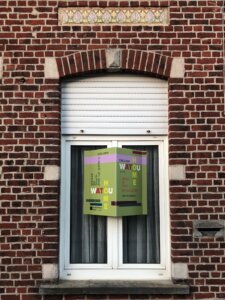 Schellekens has three series on show at Watou Arts Festival. These works, and a side project called ‘Watou at home’, are his attempts to bridge various gaps. On the one hand, there’s the distance between viewer and work, but on the other, there’s also the space that art experience occupies in wider society. In the artist’s view, art is a powerful process of exchange, which is why he tries to break down as many physical and mental barriers as possible between the work and the viewer. By turning the art into an active and social experience, he also hopes to encourage more cooperation between neighbours. 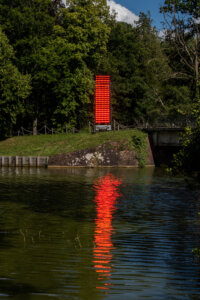 ‘Instant Sunset’ is an interactive light installation near the water, with columns of light mimicking a sunset on the water’s surface. Festival visitors have access to a panel that offers them the ultimate control to initiate this natural phenomenon. This intervention in nature – artificial, poetic but also drastic – generates astonishment, but provides some food for thought as well. Does humanity have a given right to happiness? And are we then allowed to use all means necessary, natural and social, to pursue this happiness, if it only serves the individual? ‘Instant Sunset’ explores the idea of the manufacturability of happiness within the wider frame of an individualistic society.

Underneath The Bars There Are No Bars (2022)

Schellekens often exhibits work that only becomes visible through interaction with the public and this is no different in his ‘Underneath The Bars There Are No Bars’ series. The scrolling viewer is in control. As a starting point, Schellekens uses photographs made during ‘Operation Doorstep’, a civil defense test that was carried out in 1953. The images are almost 70 years old, but more topical than ever.

A derivative of the series is also on view in this room. This was given the subtitle ‘Imaginary Lines’. These works are inspired by satellite images from late 2021 that showed movements of Russian ground troops in western Russia. Three months later, the Russian invasion of Ukraine began.